What is going on with Webtext again???

What is going on with Webtext again???

1) This is day 9 (at least) of an intermittent message displayed on screen, the date of which changes daily, saying that the service is being upgraded. Sometimes the service works, sometimes the message is displayed. I've got this message when attempting to use the service from 2 devices. I know from personal experience that it shouldn't take 9 or more days to perform an upgrade. When will the service be restored and stable?

2) Saying you're upgrading the service is a joke. Having been very reliable for many years on o2.ie, over the last few years the service has been severely downgraded. So far as I can see, only the user interface has been improved, simply to look better.
a] Much functionality has been removed, including: the ability to view sent messages to check their delivery status, and the ability to schedule texts indefinitely and to update and cancel same. Some of this old functionality clearly still exists but has simply been turned off - this is obvious when old scheduled texts re-start only to stop again, presumably when Three realises its error in re-activating it.
b] The counts don't work properly. A message may be 2 texts in length, yet the count of available texts drops by one, while a message sent to an Irish number may cause the count of international texts to drop.
c] My contacts were created over many years, some starting with +, some starting with 00, some simply starting with 353, but all worked. I realised recently that the latter no longer work but  the error message simply said the texts wasn't sent, no explanation why! There was no communication to users to advise that contacts needed to be checked and amended.

Given the shockingly poor reliability and functionality, I am forced to conclude that Three is not committed to providing its customers with a good Webtext service and is running it down.

I await your comments.

@Crocky, Hi Claire, our digital team are working to identify the root cause of all of the above. I'm happy to pass on your comments too. Can you send me a PM with your number, address and date of birth? I'll also come back to you here as soon as I have an update on the progress of the investigation.

Thanks for your reply. Sending PM shortly.

Webtext settled down over the weekend, is that a coincidence.

I do have a screenshot of the message that I had been getting every day I tried to use Webtext from Thursday the 4th - see below. The date displayed would change each day. Sometimes I'd get one text sent before the message was displayed, sometimes I'd get it immediately after logging in and not be able to send any texts.

But the counts of texts sent are still wrong, seemingly, assuming that the count of characters in my texts is correct (I've never bothered to count them!). That is, if I send an SMS that's described as 2 texts, in terms of length, the count of texts remaining available to me decreases only by one.

I updated all my remaining Contacts so that they begin with 00 or + , not simply 353, so that's behaving ok now. 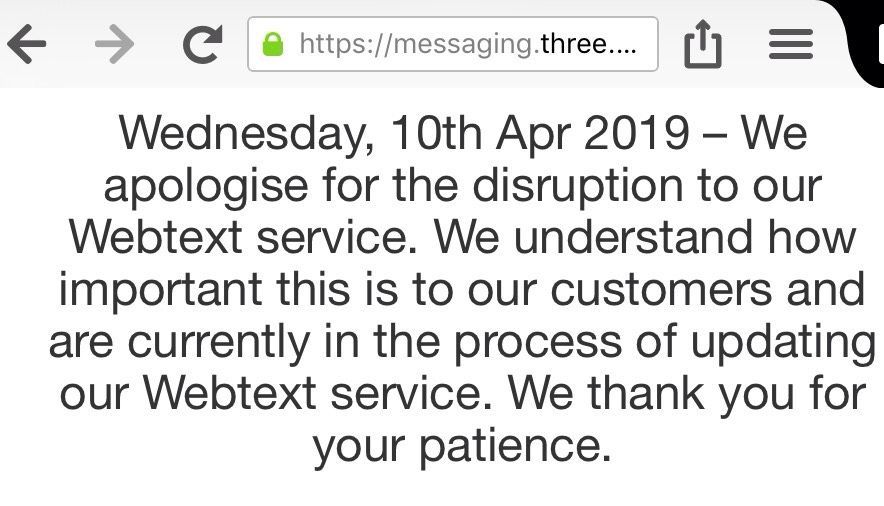 Thanks a million for that info, Claire. I'll keep an eye out for your PM.  I'd like to get your case investigated on an individual level. Can you include your number, address and date of birth in the PM?