Hi, so I was testing out my 5G yesterday and the signal was even showing up here , My 4G was already great now this morning I woke up and the signal has dropped , (from the usual -90 RSRP) all the way to -115 RSRP  and the sector ID's of the cell's have changed(so either the sector in my direction is no longer working or there was some changes made that made things worse) . So  as I was about to ask my neighbour and my brother if they had the same. He text me himself asking me if my internet was down. So its not just affecting me.  Is there any chance of this being resolved soon? Signal is terrible compared to what it was, service was great before this, I depend on the upload for work. And my brother can't even do his online college work because its too slow now. It was great leading up to this.

Signal is still the same sadly. It's being broadcasted at lower power than it used to be, or idk why else this would be done. The cell identifiers changed - which meant whatever changes were done around the 13th/14th October  made everything much worse. At least to me it looks like the mast antennae were swapped around/re adjusted or the signal broadcasting power was lowered. Why? To save money? It makes no sense why you's would make it worse 😣  The signal clearly was made MUCH worse by whatever changes they did then.

You can clearly see in these two images what I'm talking about.  I show the old previous cell ID and the signal I used to have which was GREAT , it came with that upgrade they did in August. Everyone here was happy with the internet, finally a good service after years of pleading with NBS and other providers to give people in rural areas something decent.

Then in the second image you can see how much worse it's gotten and that you can also see the ID of the cell has changed.

I hope you can like relay what i'm saying, best way of putting it is just put it back to the way you's had it when you upgraded the site on the 17th of August. Why can't that configuration be restored 😣

@HyperViz0r98 I'm passing all your feedback on and the more info we have the better so it's really appreciated. If you haven't already, can you restart your modem and anything connected to it? Then try it out for the evening and report back to me in the morning?

I really hope you do 😣 practically begging at this stage since we really have no options here so I'm complaining on the behalf of a lot more people than just myself.

As as I said, simplest thing you can pass on it is to literally just restore the same configuration that was done when upgrading the site. That was amazing and I don't see why it can't go back to what it was, plenty of others have been complaining about this since early October.

Of course I reboot my router and everything, I'm very familiar with mobile networks in particular, so I know what to do on my end troubleshooting wise. I have multiple devices to test with too to rule out any device issues. I was actually in the process of purchasing a 5G phone to begin testing the networks capabilities but when these changes were made  it put a stop to everything.  Typical after spending so much on one for it to be useless the next day.

I would typically be doing speed tests everyday / monitoring the network in general like I usually do,  tried many different setups to improve the quality of the connection etc. bit of an enthusiast.

So as soon as issues began I noticed them . The day I purchased the 5G add on to begin testing that's when the issues began, first of all, carrier aggregation stopped working , I was no longer able to stay connected when aggregating more than one band (4G + )  , connection would drop over and over in a loop. The signal remained fine that day but when I went to go testing again the day after that's when I discovered the cell ID changes and the signal deterioration. And unfortunately whatever maintenance or changes they made to the site that day have remained and it has not gone back to normal since. You can see in the images in my post above,

The CQI (channel quality indicator) was 15+  before changes, and its at 5-6 now. So the changes have made the performance worse by a LOT. It killed my hopes for 5G as well , the 4G speeds+signal I had prior to these changes were amazing, so I had a lot of hope for 5G , but now I can't even get 4G the way we used to since the problems began.

From what I can tell, it looks like the mast antennae for this sector were adjusted in another direction (because I can still get a connection if I lock it to that old cell ID, its just worse)  or the serving sector I had before, had its broadcasting power lowered or is failing for whatever reason.

I don't have any way of contacting the people who work on the mast so I have no way of getting any details as to what is wrong or why something has happened as much as I'd love to, so I have to hope you can do it for us.  Ty again. Sry for the long rant but it's so frustrating to experience a great internet connection finally to have it taken away again few months later 😞

@HyperViz0r98 Good morning, can you send me a PM with your number, full name, address (including Eircode) and date of birth? I need to pass these onto our tech team if that's ok with you? Also, have you noticed any changes in your call coverage or is it just the data that's effected? Let me know!

I sent information in pm, I believe the 2G signal was unaffected too. Band 20 and Band 28 4G are also unaffected  the signal is same on them. Its only band 1 and band 3 4G which is affected but those were the bands that give us the most speed from the connection. And those are the ones that had changes made to them which is clear to see in the images I posted earlier.

So to clarify, signal deterioration/quality occurred on  band 1 and  both band 3 cells.

It's back to the way it used to be, Thank you SO much , hopefully all my complaining did something 😄

Please tell them to keep it this way now, service is amazing yet again, Appreciate it SO much. Its back the way it used to be like I was talking about, even the old cell ID is back 😍

As of 9pm , it's gotten worse throughout the evening, signal deteriorated by about 10db , I will check again in the morning to see if it's still the same, hopefully it doesn't stay like that. You can compare earlier todays to below.

Since the signal came back I was also getting a 5G symbol on my phone, I have an unlocked S20 FE 5G which is listed on three's site, thats why I got it, but my 5G symbol is constantly flashing, , doesnt appear to establish an actual 5G connection even though its always there. Is there any specific apn settings for 5G? Or is it just not working.

And here is what happens with 5G, it'll keep flickering between outlined and full white background but wont maintain connection. 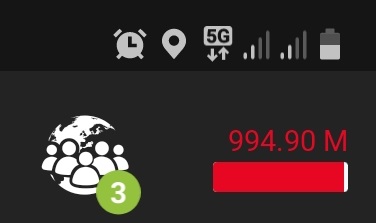 @HyperViz0r98 Hello there 👋 I was just popping on to let you know there were some changes made on the mast yesterday evening and to ask you to try it out but you got there before me 😃 I'll let the tech guys know what you observed last night and will you report back to me again after the weekend to let me know how it is? As for the 5G, do you have the 5G add on on your account? Take a look here 👉 click here Let me know 👍

HyperViz0r98
Pathfinder
In response to Three_Laur
Yeah I do have the add on, not sure why its flickering like that and not giving 5G speeds even though the symbol is there.

The signal is still like it was at 9pm last night like I showed in the image in my previous post. So its like 70% fixed 😏 ,still way better than it was when it was completely broken with worse signal. So it's an improvement nevertheless.

So yeah its like already much better just not perfect, ill let you know on Monday again if it's the same. Thanks
0
Reply

@HyperViz0r98 I've fed back your updates to the tech guys so let's try it out for a few days, let me know on Monday how the weekend goes 👌

Okay so, I would still say its like 70% fixed , signal remained over weekend.  They had it perfect when I made the initial post on friday.  I would say  they made an additional adjustment to the power / adjusted the mast antenna later that day and it made it decrease by 10 dBm.

What the signal was on Friday when I first noticed they restored it to the previous config like I asked: 😇

At least my complaint was listened to and the the cell id is now "1" again just like it used to be so we don't want that to change again. It's way better than what it was when I initially noticed the issues so there's progress now at least. I think it's just a matter of adjustment / power settings now and it'd be perfect (if possible). It was stronger on friday as I said so it's possible it can be tweaked a bit more to make it perfection 😄

On a second note/question , since Three's 5G is NSA ( non standalone)  The 5G depends on 4G to work so those adjustments/fixes brought back some 5G coverage again to where I live. From what I can tell it is using band 1 4G for the upload so that is why I'm hoping for that to be perfected again.  My 5G symbol on my phone keeps flickering between that outlined background and the solid 5G background which drops the connection. Like below

Is there a specific range limit on the tower which is causing the connection to drop (which would contradict the coverage map since it extends past me by quite a bit) ? Or is it because of the weaker signal on band 1 4G than usual? + Do you have a rough idea when 5G broadband stuff is coming?

Thanks for the help so far 😋