Status Quo are coming to 3Arena!

Status Quo are coming to 3Arena!

Francis Rossi, Rick Parfitt, Andrew Bown, John ‘Rhino’ Edwards and Leon Cave will plug back in and bring their thunderous electric live show back to Belfast & Dublin for the last time. 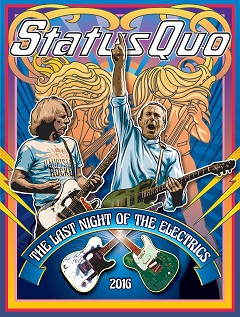 ACCEPT NO SUBSTITUTE! THE DEFINITIVE HITS was released as a 3CD collection and, with different material, as a 2DVD collection material from throughout their six decade career.

AQUOSTIC (STRIPPED BARE) The 2014 album gave the band a number five UK hit, their highest for 18 years, was certified Gold and saw them notch up their 500th week in the Album charts!  It was the best selling independent UK album of 2014

In 2013 QUO released their 100th single. The first hit was ‘Pictures Of Matchstick Men’ which reached Number 7 in January 1968, in 2014 the ‘Aquostic’ version of the track was A-Listed by BBC Radio 2.

QUO have made 106 appearances on BBC TV’s ‘Top of the Pops’ - More than any other group.

QUO have spent in excess of seven and a half years (415 weeks) in the British Singles Chart - the eleventh highest ever.

QUO have had 43 hit albums (27 studio albums of new material, 11 compilations, 5 live albums) in the British Albums Chart; more than any other band apart from The Rolling Stones.

In 1985 QUO opened Live Aid with the song which was to become the event’s anthem ‘Rockin’ All Over The World’.

QUO have been immortalised by both Madame Tussauds and Royal Doulton, starred in their own feature film ‘Bula Quo’ which was premiered at the Berlin Film Festival and raised millions for charity along the way!

QUO also created a best-selling beer brand ‘Piledriver’, in conjunction with Wychwood / Marston’s breweries in its first nine months it sold over a million pints!

In their 48 year history, it is estimated that QUO have played over 6000 live shows to a total audience in excess of 25 million people. In doing so, the band has travelled some four million miles and spent 23 years away from home.

In 2014, the year the band performed a knockout set at Download Festival, they received the ‘Services To Rock’ Award from Kerrang magazine

In 2009, Rick and Francis were recognised for their services to Music and Charity by the award of an OBE in the New Year Honours List

Are you going to be rockin' all over 3Arena in October? Comment below or click 'Thanks' to let us know!

And for your chance to pick up Presale tickets, check out this link!