For the last week the speed in general has become extremely poor , I depend on my upload speed for my work and I'm not able to do it anymore as it's become way too slow. Generally getting anywhere from 16-25 Upload now i'm getting around 3-5 Mbps. Same goes for the download , anywhere from 60+ to 40 ish at peak time is now barely 7 and thats using carrier aggregation. I noticewhat appears to be traffic shaping , does Three openly do this? For example a speedtest.net result / testmy.net result will give me 10 Mbps and then when I do one on cloudflare (which three prioritizes traffic to for some reason)I am getting the usual speeds 50-60 Mbps. I also get the same speed difference using SSTP protocol with a VPN which will give me my regular speed but this isn't practical for gaming either since it adds too much latency. Thirdly the latency has become so unstable , used to have 0 issues, wouldn't have any reason to complain, solid ping , no problems but yeah, now that is also out the window , so have Three began to impose traffic shaping beginning last week? Or is there some issue with the Arranmore cell tower (which is the one I know I connect to) going by the cell ID. There was some stormy weather around then and maybe it wasn't repaired since but that wouldn't explain prioritized traffic. Ty

@HyperViz0r98 Hello there, have you seen an improvement in the last day or two? I've looked at our masts on the islands and I see that at least one is being worked on. This might explain what you're experiencing. Let me know.

Tried to remove this to clean up post// I replied below.

Just to give an example , usually my Three Speeds are faster than the Vodafone ones. You can clearly see something is not right. I really hope it is just because the mast is being worked on. My neighbours are also complaining about their speeds so it's not just me either unfortunately.

These tests are done late at night as well so its not contention , so theres no way it should be that slow 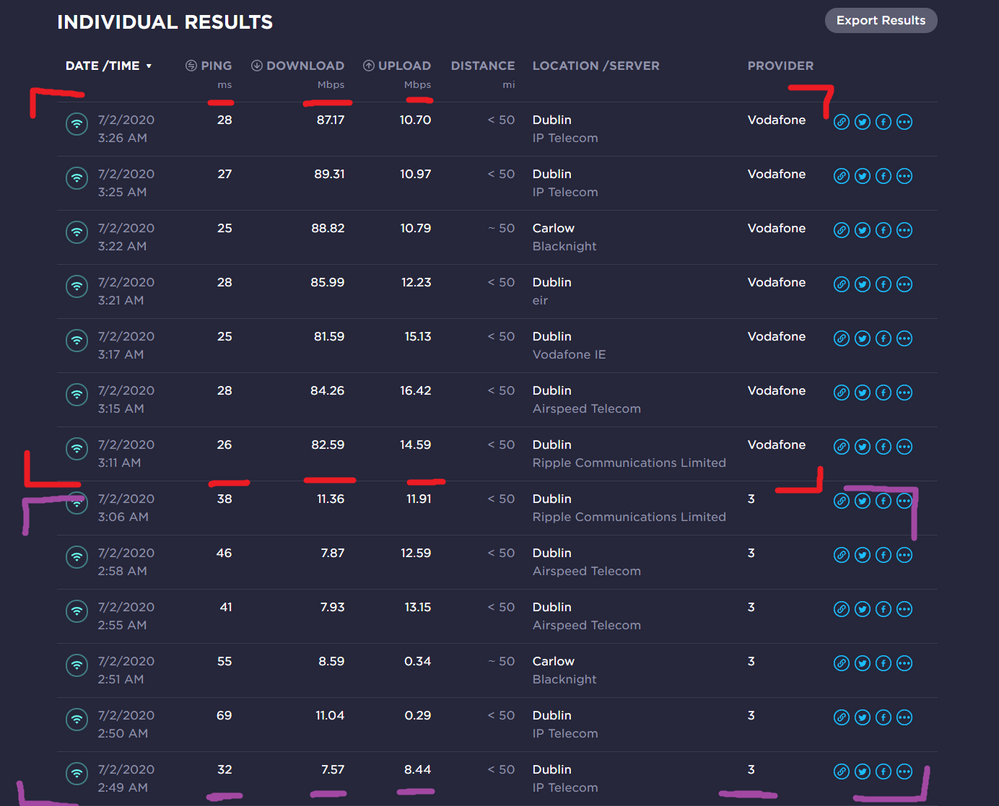 @HyperViz0r98 The best thing here is to have your individual situation investigated 👍 Can you send me a PM with your full name, number, address and date of birth? I'll then check a few things on this side and if necessary, link in with our tech team too 👌