I thought I was going mad when this happened last month and put it down to user error. But this month, it's happened again (and I've changed my phone since then too).

I'm on the BeFree Internet plan. I'm very careful about turning off mobile data on my phone a day or so before it expires, so I don't accidentally incur any €2/day charges when it runs out. Last month (when I was still using a Nokia 5), I disabled it as usual, and a day or two later I get a text saying "Your €2/day plan has been activated".

First of all, can I just say it's incredibly sneaky and customer-hostile that you no longer send out a text a couple of days before our plan is about to expire, and just tick us over to the standard €2/day data plan if we hadn't noticed.

But anyway, I assumed I'd just disabled my mobile data too late, and turned it off there and then. But again, next day, I got *another* text, saying I'd been charged another €2. I checked my mobile data setting, it was still turned off. I was about to complain at that point, but thought I'd leave it another day. I never got another text.

I re-activated my BeFree Internet plan on October 19. Coincidentally, last week, I got a new phone (a Moto G5), and swapped my SIM into it. This time I did just forget to turn off mobile data before it expired, and I got the "Your €2/day plan has been activated" text. That was yesterday. I immediately switched off mobile data to avoid any further charges.

Today, I got the text again, and was charged another €2. I checked my settings. Mobile data still switched off.

Looking at my recent usage, something has used exactly 1,019.60KB of data, exactly every two hours, between 18:20 last night and 8:20 this morning. The recent usage log on your website doesn't go back far enough to see if the same pattern occured last month when I was getting the texts.

I know you're probably just going to say "that can't happen, you must have had your data turned on". But according to my phone, at least, I really didn't. The Data Usage settings page also says no data has been used today, though I know that's never 100% accurate: 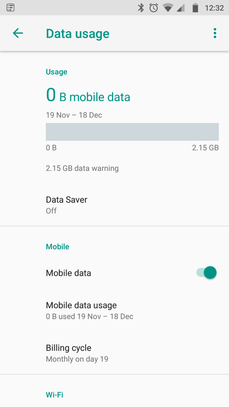 (Yes, I know mobile data is turned on in that screenshot -- I've just turned it back on because I've just re-activated my plan again.)

It also seems weird that the start of that 2-hourly usage pattern more or less coincided with me turning off data on my phone -- there's no sign of a similar pattern in the previous days.

Any suggestions as to what's going on?

@scottishwildcat Have you checked to make sure you were actually charged the 2 on day two of plan expiring when your data was off? Is it possible that there's a delay in the €2 message? I think if you're really not sure how this is happening, you need to contact the mods here to get your usage looked at and the charges. That way you'll know. @Three_Rachel @Three_Mairead Send either of them a PM.

Yes, the call usage log on the website shows I used data both days, and was charged €2 on both days (18th and 19th November).

RIght, data plan expires again in a couple of days and I'm turning off mobile data right now, at 20:08 on Dec 15. Let's see what happens this month...

Gah, hasn't happened for a while, but definitely happened again today.

Turned data off on my phone last night about 10pm, because I knew I wasn't going to need it today. This morning I get the text my phone saying my €2 day pass has been activated. Checked data setting--it's definitely still turned off.

Almost exactly every 2 hours, something on my phone is using 5.12K of data, and sometimes at least, it can apparently do it whether my data is turned on or off

@scottishwildcat Hi there, thanks for keeping us updated. After the last time we discussed this, I looked into possible ways that as to why data connections happen when data is turned off. One of them is WIFI assist. I don't think we mentioned that previously. Can you have a look here WIFI Assist and check that it's switched off on your phone?

Thanks for the suggestion, I don't see any such setting on my Moto G5 though.

Can you check if you have the below in your settings? ⬇️

From a Home screen, navigate: Apps > Settings > Wi-Fi.
Tap the Menu icon (located in the upper-right).
Tap Advanced.
Tap Avoid bad Wi-Fi connections to turn on or off

These are the only advanced options I have in the WiFi settings: 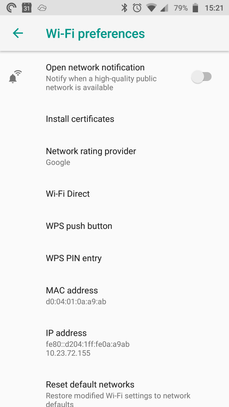 I did then remember these two options in the phone's developer settings, but they're both off too: 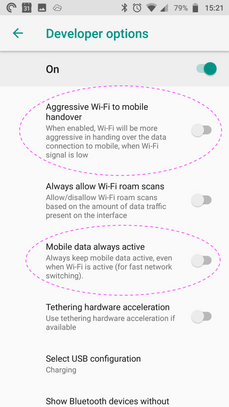 Thanks again for doing all that, please pop me a PM and I'll look into this for you.